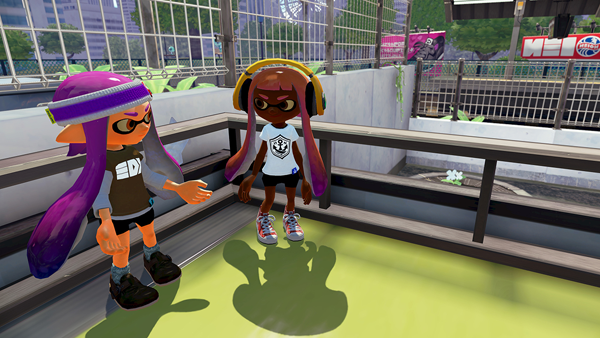 After Splatoon had been out for a few weeks, I went out to dinner with a friend. We had sushi, appropriately enough. They asked me what I had been up to and I told them I’d been playing a lot of Splatoon. I explained that it was an arena shooter that addressed many of the issues with the genre that had kept me away in recent years. Splatoon does not have a hint of jingoism, doesn’t have blood and violence, and the object of the game is not to earn the most frags, but rather to paint the largest area for your team. I also mentioned how much fun I’d been having collecting the various clothing and accessories in the game, which are not only stylish, but confer various bonuses in-game. My friend exclaimed, “That game sounds very femme!” I rejoined, “Well, except you can’t wear skirts or dresses.” They replied, “Ah, well.”

There is no logical reason for stat bonuses granted by gear in many games. Certainly in a fantasy world there is magical enchantment and in a science fiction world there are nano machines, but in a modern setting, why would what you tie your hair with affect your ability to punch things? In Splatoon, the connection between bonuses and equipment seems even more whimsical: use less ink because of your shoes; move faster because of your shirt; get your special faster because of a headband. Even given the conceit that Splatoon takes place in a post-apocalyptic future where humanity is long extinct, the bonuses given by the clothing don’t make a whole lot of sense—and no matter what you choose, you’ll be okay, as the most important thing in the game is to stay fresh and go with a look that suits you.

For as long as I can recall, my clothing and performance has deeply affected how I felt about myself. For the longest time, this meant that I basically felt like garbage and had no connection whatsoever to my clothes. I bought Metallica shirts because I liked Metallica, and that’s as deep as it went. When I found out I was femme and that I was allowed to wear pretty things—that I could wear eyeshadow and lipstick and foundation—it’s when I could finally feel good about what I wore. I finally understood what was fun about going to the thrift store and finding something that you could make a deep connection with, something that really suited you.