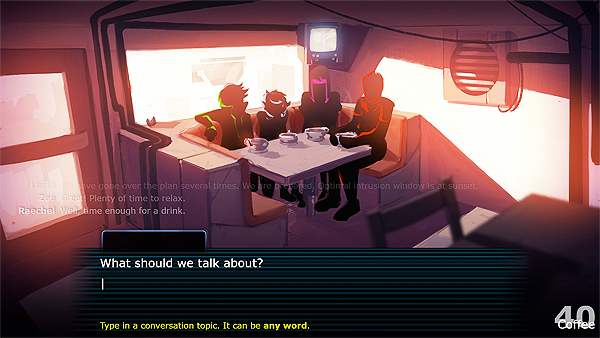 During PAX East, I got the chance to sit down with Alex Zandra Van Chestein—an independent game developer and member of the queer game development collective Ikonoclast.❤ Her upcoming game, One Last Cup, features a group of four cyberpunk operatives sharing coffee before their incoming mission. All four main characters are women, and the game features queer issues in many of its dialogue branches.

In the middle of a somewhat-crowded hallway overlooking the Expo Hall, Alex and I came together and talked about her game in detail.

Ana: Tell me a bit about yourself, Alex.

Alex: My name is Alex Zandra Van Chestein. I am officially an independent game developer since Monday [April 18, 2016]. I’ve worked for six years at Frima, I’ve done a ton of little games before then and also during that time. The most formal thing I worked on was Chariot; I was the game designer and writer, and I designed some of the levels. Other than that, I’ve been working on a ton of stuff, like mobile games, social games—stuff like that. But One Last Cup is my first actual indie game with a small team that I’m doing, and it’s very exciting.

Ana: So, tell me a bit about One Last Cup.

Alex: It’s a cyberpunk coffee shop conversation game. It’s kind of a setup to most of the cyberpunk-themed games you see where you have a team about to do a job, like a heist-type job where you have the technologist, the mechanic, the muscle, the fast-talker. Instead of actually doing the job, though, your role in the game is you decide what they talk about over coffee before leaving. So some folks have referred to it as the diner scene in Reservoir Dogs, if that was the whole point of the game.

So, essentially, you just type in a topic—almost any topic at some point—and they just talk about it. And you learn more about the characters/who they are from what they talk [about]. And sometimes the things they talk about may bring up interesting words that you can then type and see where they go. You learn more about them and the world, and as they talk, they drink coffee. And once the coffee’s gone, they leave for their job, and that’s when your role in the game ends. And then you get to see how the job goes bad, and how they all die. And that’s the game!

But you get to learn how they die, so now you can start the game over, have them talk about things that will prepare them for that and change the outcome. It’s a dangerous job and will always kill at least one person, and you need three of them alive to finish it. But at some point it gets more complicated than just talking about the things that are mentioned at the end. You need to actually work with their relationships to each other. And that gets a little more complex.

Alex: The little spark was a tweet by Carolyn Petit when she was talking about wishing for more opportunities to delve into the world of games like Shadowrun where it’s not just about the job, but you get to see and live in the world a little bit. And I tweeted back, “Yeah, I would totally play a game where you play a team of Shadowrunners having a last cup of coffee before a job that goes bad.” And I kind of mulled it over, and was like “I could actually make that game!” And that kind of led to me going into that.

Alex: That was a few lifetimes ago, so it was great to come back to that kind of setting. It implies creating a whole world, which is interesting because this is a game mostly about dialogue. If I want to write about politics, I have to think: “Okay, well, what is the political landscape of this entire setting?” And then step back and think “What would these folks talk about, specifically?”

Kind of a theme of Shadowrun—but also something inside cyberpunk generally—is [that] the people who end up in these jobs often tend to be marginalized parts of society, just because if you’re not in a very comfortable position socially, you can more easily be funneled into the kind of work that makes you do desperate things. And so that’s when you get to see very colorful characters. People that kind of fall out of the norm. And I think, also, it’s a good opportunity for players to identify with more interesting characters in a world that’s already very interesting.

Ana: There were a few times when I went to put in an input, and it didn’t quite go to a narrative branch at all. However, it did say something about leaving my input as feedback. You were telling me Friday that that is, in fact, a feature—that you’re holding onto all these different inputs that you’ve gotten?

Alex: Yup, that’s right. Since it’s still in development, the mechanic is essentially that you type a word, press enter, and then you see if it brings up a conversation or not. I have a list of words and conversations I’ve written; I’m doing the Scribblenauts approach where I will just write every possible conversation topic in the world.

Alex: I have a synonym system where some words—like, a bunch of words—will point to the same conversation. Like, if you type “job,” I have a topic where they talk about the mission. But yeah, when folks type in a word that does not lead to a conversation, or is not a synonym, it’s recorded. Like, my whole demo is recorded locally, so after a convention, I get a big list of words, then I can check “Okay, well, a bunch of people typed this word in, I should probably make a conversation out of that.” Or, “Oh, a lot of people typed this, but I have a conversation that’s very close, so I should add it as a synonym.” So it’s been really enriching.

And we have a demo right now up for patrons, and that demo is going to go live for everyone soon, and it’s an online feature—it’s on itch.io. So, all the words that are invalid are still funneled to a server somewhere as a very simple list of “Here’s a bunch of words!” and then I can get an idea of what folks wanted to talk about. And that’s been really great in helping shape the game. And it’s all something I want to keep once the game is out, in case I want to add some conversations later. 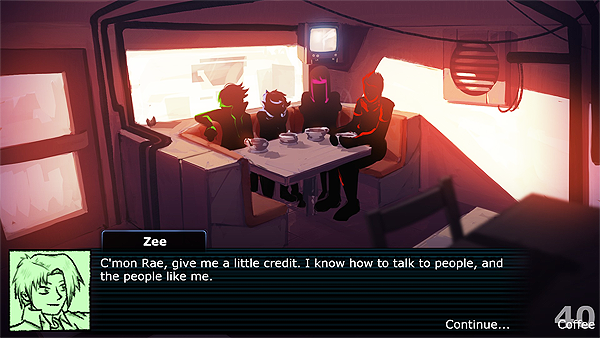 Ana: Oh, okay. So kind of like, updating the game with more conversations?

Alex: Yeah, like, if the final product is in a place or a platform that’s easily updatable—might as well! I mean, cause then that would be a way to enrich the game a little. Or at least help us know more about what people type, or what people want to talk about in that kind of instance. So if I reuse this sort of system later, I’ll have more knowledge about it.

Ana: Do you think it adds an organic element to the story that way? It’s almost like players are giving feedback, and continuing the story through their input?

Alex: A little bit. I mean, the game is locked to that conversation. I can add more topics, more things to talk about, but there’s still what happens afterwards. It’s a bit like I’m DMing a Shadowrun game or a cyberpunk game. They are going on an adventure, and I’m using the information—the stats, and the switches that have been flipped by the conversations—to decide what happens.

One thing I do want to keep is the fact that even innocuous conversations—just talking about the weather, or talking about any topic that folks will like—will affect a little bit how they relate to one another, maybe affect little flags in the background that may trigger certain automatic conversations if some conditions are met. There’s no useless topic. Some combination of topics will lead to things that will affect the outcome of the conversation.

Ana: Do you have any plans to publish analytics of, say, the most popular conversation choices? I know games such as Life Is Strange track that for players.

Alex: Oh, that’s a good idea. I hadn’t thought about it, but we do track the valid words—as well as invalid—just because it’s also a way to tell how far people get. Like, a bunch got here, then, oh, a bunch fell off there. But, yeah, it’d be something interesting.

Ana: As you continue to work on the game, what’s the road map for development? Where are you headed?

Alex: I need to overhaul the ending system. Right now, it’s very patchwork. I did it really quickly. I need to rework it to be something a little bit more interesting to watch, and more informative. Aside from that, most of the systems are there. So, it’s just gonna be refining the visuals as we get those done, refining the music (we have some interesting music systems that are going to be in the game), and really just writing a ton of dialogue. And also doing some very, very crunchy design work planning. Like, how does this adventure work? How do I guide players through the story? And I might end up doing some sort of visual map of “Here is where the story goes” and “Here is how you actually make it.”

Ana: I really like the direction your project is going. I’m kinda curious if you had any ideas that you were brainstorming for your next project?

Alex: At the moment, not a lot. Eventually, I’d like to make a 3D game, cause I always make 2D games in Construct.

One thing I wanted to do—I think I spoke to Gabby DaRienzo—I kind of want to make an EDF-style game where you’re a character in a Blaster Master-style tank and you’re defending a little city block from an alien. And one thing I’d like to try is that you’re essentially invincible, your weapon’s incredibly powerful, so you don’t need to see the enemy’s health or your health or whatever, that doesn’t matter. What the HUD will tell you is how many years that “corner store” has been in the local family’s ownership, or the cultural significance of that monument right behind the monster, and stuff.

Essentially, it’s a game about being an exterminator in an antique store, but all you have are shotguns and grenades. You’re very powerful—[so] how to very, very carefully use that power so you don’t bust up the city and break up things that will really make people sad because they have a lot of meaning.

Ana: I was just thinking, it’s like meaning-making, which is a good point, because a lot of times in those games, we just think of these places as set pieces. But it’s important to think about the fact that, if I were really there, this would be very significant, because these are meaningful things to people.

Alex: Exactly, yeah! So like, defend the city, but please don’t be a bummer to the people who have to come back to the city. If all you did was break some parking garage—cool! But if you brought down the school, and a beloved community center, that’s just gonna to be a bummer.

Ana: It’s games like those that really make people think about the world around them.

Ana: Thanks again Alex! It’s been really fun talking about your project.

Alex: It’s been a blast, thank you so much for having me!

For more information on Ikonoclast.❤ , check out their Patreon profile here! Alex Zandra Van Chestein also supports the author, Ana Valens, on Patreon. You can check out her Twitter profile over @havochq!