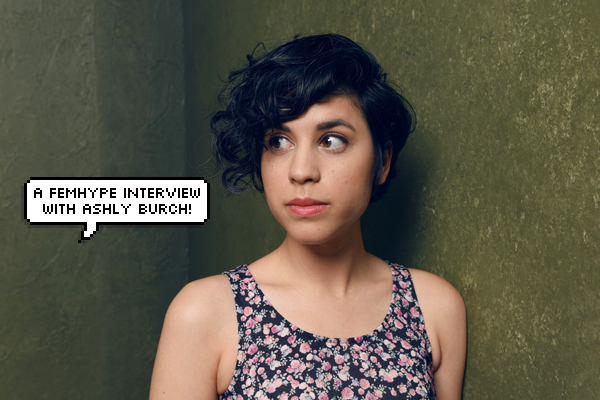 Life Is Strange means a lot to me with the topics it has covered and the characters it has brought forth. After the release of “Polarized,” the final episode of the season, I was lucky enough to get into contact with the wonderful Ashly Burch who plays everyone’s hella favorite punk: Chloe Price. I got to ask Ashly numerous questions about Life Is Strange, Chloe Price, queerness, and the darker themes of the game, as well as some lighter topics at the end to break things up a bit more.

Ashly can be found on Twitter at @ashly_burch and on Patreon. Without further ado, here is my interview with Ashly Burch!

Sloane: How did you first find out about Life Is Strange and what about it pushed you to audition?

Ashly: Haha, this isn’t as exciting a story as one would probably hope—I received an audition notice from my agency! But I could tell it was going to be a special game even just from the audition sides.

Sloane: If I remember reading correctly, you ended up auditioning for both Chloe Price and Max Caulfield. I’m really curious—after hearing you so much as Chloe, what did you know about the two before the audition?

Ashly: It’s been a long time, so it’s hard for me to remember what was provided on the audition sides—I remember I saw concept art for both characters, and I really loved Chloe’s look. Typically, audition sides will have some background on the character, a brief synopsis of their personality, sometimes an image of what they look like, and then of course the dialogue the devs would like you to perform. I remember reading Chloe’s background and personality and immediately knowing what voice I wanted to give her.

Sloane: How much of the game did you know about as you worked on it? Did you know about the basic outline from the get-go or were you busy forming theories in between recording voiceovers for episodes?

Ashly: I actually didn’t know anything about where we were headed in the story, and honestly, I think that ended up being for the best. In the recording for Episode 4, I was told what Chloe was going to go through and what she was going to discover on the day for that episode, so the reaction that happened in me was very genuine and raw. Same with Episode 5.

Sloane: What do you feel was the hardest scene for you to record, and what was the most emotional for you in general? Alternately, what was your favorite scene?

Ashly: The most emotionally draining—but ultimately most rewarding scene—was when Chloe finds Rachel buried in the junkyard. That hit me really, really hard. My heart really broke for Chloe. I’ve gone through something similar (not finding the body that way, of course, but losing someone that close), and I can’t imagine going through it at that young an age.

Sloane: A big question in general—I’m really curious about how you picture Chloe. I know she’s defined very well in the game, but how do you see her gender and sexuality?

Ashly: I think Chloe is sexually fluid. I don’t think she really likes to label herself in any particular way—same with her gender.

Sloane: Were you ever told about or did you ever think about Chloe’s relationship with Rachel Amber? We get a lot of hints and clues in the game, but is there more than was ever led on? Did they date? Do you think they did?

Ashly: I definitely thought about Chloe’s relationship with Rachel a lot, because finding Rachel was, of course, her primary motivation for much of the game. But I should stress: this isn’t canon, this is absolutely just my interpretation. I think Chloe saw her as a goddess, and I imagine Chloe being sort of like an excitable puppy dog around her, always wanting to impress her and get her approval. I’m actually not sure if they dated. I imagine Rachel being more mature and poised, and really enjoying Chloe’s company and her devotion, but keeping her at a bit of a distance.

Sloane: How easy or hard was it to connect to and get into Chloe’s shoes? She’s a deep, almost tragic character, and I can’t help but wonder how it was to get into her head, so to speak.

Ashly: I relate to Chloe in many ways—I think a lot of Life Is Strange fans do. The core of Chloe is fear—fear of being abandoned again, of being alone, of not being understood. And the way she handles that fear is by not letting anyone in, by puffing up her feathers and giving a middle finger to anyone that might try to hurt her. I think many of us have that same fear. It doesn’t manifest outwardly with me the same way it does with Chloe, but I definitely feel and understand it.

Ashly: It was shocking, absolutely. And so interesting to perform. The blue haired, punk rock Chloe we knew in the previous episodes, like I mentioned before, had a lot of bravado to mask her fear. The alternate Chloe felt completely stripped down—raw. Just … tired. It was an emotionally taxing, but incredibly rewarding challenge to try to convey that.

Sloane: Were there any inspirations you had that helped you really push Chloe forward or helped you get into her on a deeper level?

Ashly: As I mentioned before, I think we can all relate to Chloe in different ways. I tried to pull the parts of me that could feel what Chloe was feeling.

Ashly: I think she would’ve thought Victoria was a huge pain in the ass, but sort of appreciated how bold she was (and probably would’ve thought she was kind of hot, too). I think Chloe would have no idea what to do with Kate, haha. She would probably be a little awkward, not know what to talk about. And I think she probably got in a lot of trouble at Blackwell. Talked back to teachers, caused mischief. I think she probably wasn’t good at certain art classes and would hide her embarrassment by saying that the class itself was stupid. I bet she was trying to learn how to draw and was getting pretty good.

Sloane: Life Is Strange goes over a lot of tough themes. Bullying and cyberbullying, suicide, and sexual assault, just to name a few. How do you feel about games starting to go into these topics that may affect a big part of the audience?

Ashly: I think the biggest thing is to try to approach these subjects responsibly. Games can be an incredibly powerful, cathartic tool for players, and can help people feel like they’re not alone. I think it’s amazing that games are starting to explore subjects like these. It’s just the responsibility of the developers to know what they’re putting into the world, the effect it might have, and to handle each topic with sensitivity and awareness.

Sloane: Episodes 2, 4, and 5 in particular deal with harsh topics—ones that hit home for myself and other people I know. How do you feel the game handles those topics? Moreover, what are your thoughts on calls for trigger warnings in games, episodic or not?

Ashly: I know the devs at Dontnod have tried very hard to responsibly handle the topics they’ve introduced in Life Is Strange. I was really grateful and proud that they made efforts to disseminate information about suicide and bullying. And I personally support the inclusion of trigger warnings in many forms of media. 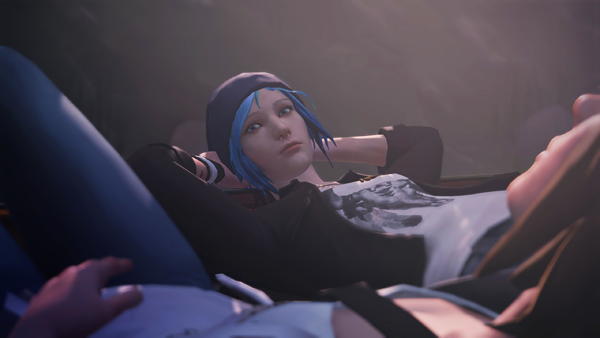 Sloane: I see Life Is Strange as a very queer-coded game. Even discounting the kiss in Episode 3, for Max in particular, the game has a feeling of coming of age and queerness to many fans. What are your thoughts on how the game deals with Max and Chloe’s relationship? Does the relationship between Max and Chloe seem concrete, or very open to interpretation?

Ashly: Life Is Strange is very much about choice, and I think the devs wanted players to be able to decide the nature of Max and Chloe’s relationship. But again, the lovely thing about the game is that the subject of queerness is present regardless of how you choose to shape Max and Chloe’s relationship, and I think it does a wonderful job of normalizing and supporting any choice you choose to make.

Sloane: Do you think that the game could have been more forward with its queerness and Max and Chloe’s relationship? We had Max’s nightmares, but in the ending where Chloe lives, it all seems to end up as nothing. Yeah, there’s the “Sacrifice Chloe” ending, but that’s a tragic death where the girls can’t end up being together with the one that (at least to me) they love.

Ashly: I think I know what you’re referring to! If you’re team Pricefield (i.e. if you view Chloe and Max as a couple) and you sacrifice Arcadia Bay to save Chloe, there isn’t a moment of intimacy between them in the same way there is if you decide to sacrifice Chloe. I understand the frustration there, particularly because investing in Max and Chloe as romantic partners, you kind of want that *moment*. But I guess to provide a different perspective, I think for Max and for Chloe, the choice to sacrifice Arcadia Bay is very loaded and tragic, and although they love each other and they’re confident in their choice when they make it, I wonder if it would’ve felt wrong for them to have that moment while their town is being destroyed.

Sloane: Wrapping up, what do you think about the fan community that’s sprung up? Fanart, cosplaying, and fanfiction have popped up so quickly, and I’m curious about what you think when you see people recreating your character.

Ashly: I feel so honored and happy that people have responded so much to Chloe. I put so much of myself in her, and I really got so attached to her, and to have people mirror that same attachment and care is incredible.

Sloane: I’m definitely on the team of Chloe and Max being The One True Pairing, but, as a fanfiction writer who especially loves writing about Life Is Strange, I have to ask: who do you/would you ship? If you could make any pairings canon, what would they be? And going on with that, is there anything that may not necessarily be canon that you like to consider canon?

Haha, this is going to sound like such a cop out answer. But when I was performing, if Hannah wasn’t in the booth with me, I would pull from different relationships in my own life. Sometimes when I spoke to Max as Chloe, I would pull from my relationship with my friend Ally. Other times I would pull from past relationships with lovers. It was a mixed bag, to be totally honest. So Chloe and Max’s relationship, to me, is a jumble of a million different things. And I really feel like they are whoever each player wants them to be, and that’s really important to me. Because Life Is Strange should feel unique and personal to you.

Sloane: Ashly, I just want to thank you so much for doing this interview, and one last question—what do you imagine Max and Chloe doing after they leave Arcadia Bay in the “Sacrifice Arcadia Bay” ending? And do you think Chloe would have sacrificed Arcadia Bay for Max?

Ashly: I imagine them going to California and camping along the PCH for a while. Then going somewhere remote, maybe a town in the midwest or something. And yeah, if presented with that choice, I think Chloe would. I think Max would have to convince her not to. 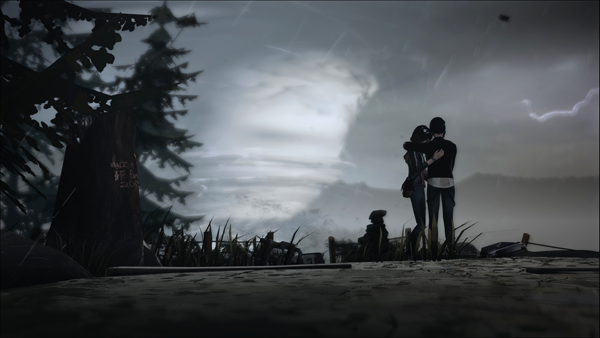 2 thoughts on “Hella Talk: An Interview With Ashly Burch on Chloe Price, Queerness, & ‘Life Is Strange’”