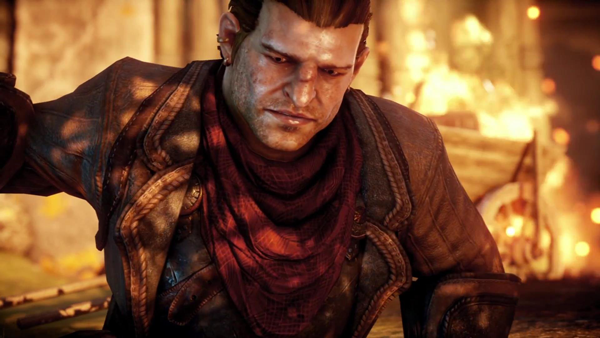 I’m a sucker for tragic romances. You know the kind I’m talking about: war-torn setting, impossible odds, and two people in the middle of it all without a clue as to how they got there. They wouldn’t have even met had a series of events not thrust them together in the first place, but when they do meet, it’s with the earth-shattering realization that they were meant to fall in love and change the world. Probably in that order.

Countless articles have been written about Varric Tethras, and rightly so—he’s our infamous narrator, the voice that navigates us through each dizzying chapter until the story’s completion. Many Dragon Age fans have speculated that Varric is asexual or aromantic, and given the complete dearth of asexual characters in video games, I fully respect (and encourage!) fans to identify a beloved character with whatever they so choose. It’s also perfectly reasonable to headcanon Varric anywhere on the sexuality spectrum given the fact that we have so little information on him in this regard, and I’m certainly not here to fire those theories out of the sky with anyone’s crossbow. Keep on keeping on, fandom.

For my part, while playing through Dragon Age 2 on our YouTube channel, I couldn’t help but notice something a little too intriguing to be overlooked. You’re all well-acquainted with Varric’s near-constant chatter every time you bring him along in the party. Regardless of what character combination you decide on, Varric seems to be free of bias, and shares snippets of his ongoing tales of adventure and romance as you stumble your way through Kirkwall. Not surprising to anyone, right? Except, the thing I couldn’t get over is, Varric sounds a lot like he’s dropping hints for us about his own personal story—the one we almost never hear about. I think he’s talking about himself. And once you start really paying attention, the reason why Varric isn’t a romance option becomes glaringly obvious.

Before you venture any further, though! Please note that none of these theories will be taking the DLCs into account.

It’s very common for a character who is an established storyteller to cloak truths about themselves in exaggerations or outright lies. This is behavior that’s two-fold in nature: first, the character’s story in its entirety is dismissed due to the dramatic retelling, and second, the character is no longer seen as entirely forthcoming about anything of importance, so any further correspondence is taken with a grain of salt. It’s all very reminiscent of The Boy Who Cried Wolf, but if used as an advantage, can be a very powerful defense tactic. Varric plays this game well, so it’s our job to pick out the truths he lets slip. That, of course, is a massive undertaking for another post—but it still serves our little investigation here quite well.

“We dwarves are drawn to shiny objects. Sort of like Magpies, but with business sense.”

As a brief lesson, magpies are extremely social birds that are “considered one of the most intelligent animals in the world, and the only non-mammal species able to recognize itself in a mirror test.” They chatter amongst each other and emit a wide range of creative vocalizations. In Western folklore, magpies are tied to associations with witches and wizards, and can, allegedly, communicate messages to and from the spirit world—like living bridges, only cuter. If that isn’t heavy-handed symbolism, I don’t know what is.

Just as magpies search for shiny objects among the trash, you’ll start to see the hints I’m referring to when you know what you’re looking for. My theory here is that Varric can’t be romanced because he’s been in a committed romance this whole time (and I’m not talking about Bianca).

Aveline: Why are you still here, Varric?

Varric: Starkhaven’s too pretentious for me and Cumberland’s too boring.

Aveline: You always say you hate commitment, but here you are, six years later, still at Hawke’s side.

Let’s try a little exercise (i.e. humor me for a minute here). Suppose that all the events you played through in DA2—from the small, nightly skirmishes in Hightown all the way up to the completion of a companion’s personal quest—are entirely framed through the lens of Varric’s creative license. If that’s true, it means that this is the first installment in the Dragon Age series where we, the player, essentially played a fictional retelling of a story that didn’t happen (at least not the way we remember it). This is supported in the narrative as well, given the fact that our choices had very little impact on the trajectory of the overarching story. No matter who you romance or which side you choose, Anders will always destroy the Chantry and a war will always break out, the ripple effects of which are felt very keenly in Inquisition.

Still with me? We’ve established two things so far: we didn’t control any of the events that unfolded in DA2, which means we know about as much as Cassandra learns. Basically, zilch. The Champion that Varric lauds above all else in his stories is nothing more than a fictional caricature of the human being who actually existed. We might have played the Champion, but the real Hawke is the card that Varric refuses to play for fear of showing his whole hand. And why is that, exactly? What’s so important about Hawke that Varric isn’t telling us the full truth?

Varric is a gambler, and a good one at that. But the tricky thing about gamblers is that they know how to hold all their cards close to their chest, and our illustrious Lord of the Chest Hair is no exception. Even when the Inquisitor inquires after Bianca, he says very little about their history—which is, decidedly, over and done with. If anything, he sounds tired when he’s forced to talk about his past relationship, nothing at all like the Varric eager to share another snippet from his travels. Even when Bianca physically visits Skyhold, we never catch the two of them in a darkened corner of the keep holding a weighty conversation with each other that borders flirtation in the beginning, but okay. I get it! That’s circumstantial evidence at best.

There are two assertions listed on the Wiki page that are of particular interest to us at this moment, both of which come from the angle of the developers:

“Regarding romance, according to David Gaider, they almost did ‘slip something in there.’ They talked about having the interrogation end with Varric meeting back up with Hawke and explaining that he’d told them everything, in which case Hawke would say ‘Everything?’ and Varric would respond ‘Don’t worry. I skipped the part about us.’”

As this wasn’t included in the final cut of DA2, I think it’s fair that some may feel inclined to dismiss this as outright canon. However, the very next bit of trivia states that, “Due to Varric’s role in the game’s storyline, he is the only companion in [DA2] who cannot have crisis points and leave the group.” To me, that more than anything suggests Varric has been in love with Hawke to some degree since they became partners. With or without that initial discussion to confirm their romantic history, and whether or not they consummated or even established a relationship, they have been more than just friends for quite a while now.

Even if all of this was confirmed tomorrow and Hawke x Varric became an actual thing (Vawke? Harric? Somebody help me out here), I’d still be pleased with the way Bioware handled this particular “romance.” It was truly a beautiful experience being invited to play through the slow progression of their relationship in DA2, only to have their love for each other further established in Inquisition despite everything conspiring against them. Not many games foster that kind of intimate friendship, the kind that builds slowly and withstands even the greatest distance and impossible odds. Like anything else, I’m glad this isn’t confirmed, because it allows me the permission to come up with headcanon like this to tide me over.