High heels on female characters are a source of contention for many (usually not male) gamers. They’re impractical, extremely sexualized, and pretty much have no point other than to make walking across the ground scarier than normal-er, making your butt stand out. You can just toss them in the bucket alongside chainmail bikinis, boob armor, and the remaining dredges of female patience. They’re an overdone aspect of a dominant culture that still balks at having girls in the foreground of AAA cover art (see: The Last of Us) and a surefire way to get a flurry of feminist commentary buzzing on any new release.

However, I’d be lying if I said there weren’t interesting heels here and there. I’ve seen them used as weapons, some have memorable designs, and a few even match the female character’s personality instead of completely contradicting it! While we’ve reached a surplus of sexy footwear and I wouldn’t shed a tear if I saw a little less of them, let’s take a look at the standouts in video games … for better and for worse.

You knew she’d be on the list! Bayonetta’s high heels are no doubt for looks, accentuating her skintight outfit and making her already mile-long legs stretch into another dimension … and I don’t mean that entirely metaphorically. Bayonetta is a witch, a mystical being who can use magic to do everything from transform into various animals, contort her hair into a demon-chomping dragon, and transcend the physical restrictions of space. Oh, and her heels are guns!

Well, that or rockets. Or cannons. Or whatever you feel like equipping in this epic, dizzying romp of a game. They’re bombastic weapons that haven’t often been done well (let’s not talk about Planet Terror) with colorful and ornate design work to boot (ha!). Bayonetta took something overdone and hypersexual and kept it overdone and hypersexual … but cranked it up to eleven. If you’re going to go down this tired route, you might as well go all the way. Frankly, I dig it.

The justification for Fran and the viera (medieval bunny warrior race) in Final Fantasy XII is a doozy to follow, so listen up. You see, they naturally have elongated human-like feet, which means they have to wear stilettos as their primary footwear … yeah. Many players have called this out and asked why they couldn’t at least wear wedge heels (in my experience, less sexy and less excruciatingly painful) or run around barefoot, but logic probably wasn’t added to a character who wears metal lingerie 24/7.

On the plus side, the design of the heels are rather cute—they’re rabbit-themed and have some neat little details like spikey double-heels and claw ornamentations decorating the front. While I’ll side-eye a shoe that’s clearly made out of the hardest material possible (barring Cinderella’s infamous slipper), at least Fran’s are painful for both parties! 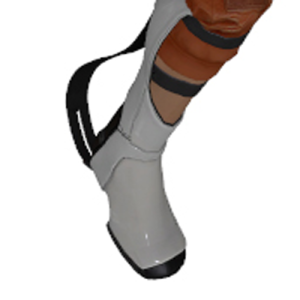 While Chell of Portal fame doesn’t have typical ‘heels’ per se, they contour her legs in a similar shape. In the first Portal they take the form of metal springs attached to her calves, while Portal 2 turns them into high-tech spring boots. In both games they’re used to break her fall, which is useful considering she often falls from great heights while being badgered by malicious A.I.

While I’d still be unlikely to see a male character wear something like the snazzy and leg-lengthening boots she dons in the sequel, it’s good to see a bit more creativity in a design area that’s usually boring as all get-out. It’s almost like you can use the environment and story to make your character designs make sense! The real conundrum, though, is where I can get a pair. 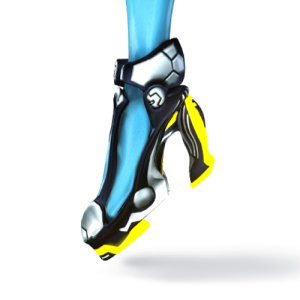 There were a lot of unhappy voices raised when Zero Suit Samus returned to Super Smash Bros. for the Wii U wearing a pair of rocket high heels. After the shamelessly sexist writing of Metroid: Other M and the somewhat questionable toning of her original physique in Super Smash Bros. Brawl (did you know she was 6’3″ and two hundred pounds in Super Metroid?), this sent many into a last-straw tizzy.

How does she fare in play style? She’s a beast, with incredible power and a wide range of attacks … but with the unfortunate spine-twisting poses we’ve all come to know and love in our male-dominated media. While rocket shoes would’ve been a neat addition, these heels look visually unnecessary and do the extra damage of not fitting a character that’s already long been hampered by misogynistic tweaking.

The zombies and shady corporations of Resident Evil won’t stop this woman from fighting in heels and a silk evening dress! In spite of her completely illogical attire (at least Zero Suit Samus’ clingy suit won’t trip her while running), she is one of the most capable characters in the series.

One moment she’s a spy on a quest to steal top secret technology, another moment she’s assisting an undercover soldier in a rescue operation. She even drops the dress at one point in favor of a cropped jacket and smaller heels in Resident Evil 6. Is there nothing she can’t do? While her bold red dress and fancy shoes are her signature look, she’s an example of how developers are more than capable of stepping away from sexy attire and dressing down their female characters in a little realism once in a while.

A rare and welcome case of heels existing as more than just fanservice. Vivienne of Dragon Age: Inquisition is a woman who comes from an aristocratic society that greatly values reputation and appearance over almost all else, to the point where she will deign to look classy even as she romps through mountains and takes down brigands (let it be known I am going to cosplay her someday).

It’s refreshing to see a character wearing heels that inform her personality rather than the cheap and titillating default we’re all so used to seeing. To push matters further, she’s contrasted by other female characters, like the practical boots-wearing Cassandra and the casual bare-footed Sera. To sum it up, Vivienne (and by extension, the Dragon Age series) is just pretty damn awesome, and the sooner developers take notes, the better.

If anyone has played these games, you can probably attest to her cold confidence and the brutality of her attacks. She’ll strangle her opponents with metal and cord, gut them in a variety of combos, or just curb-stomp them under her heeled thigh-high boots. Her shoes contribute to her overall ensemble of terrifying (no bra!) attire and make a strangely effective case of how looks can kill … and be super duper sexist. At least you can dress her up like a pirate.

Fina is a white mage in the cult classic adventure RPG Skies of Arcadia, with her powers revolving mainly around healing and buffing stats. Her character animations are limited and stiff. She mainly stands around during battle, hardly moving, and letting her magic do most of the work. Her main weapon is even a shapeshifting alien that moves of its own accord and turns into whatever she wishes so she can remain out of the fray away from danger.

Basically, the most realistic heel-and-dress wearing gal on this list. Onto the honorable mentions!

A warrior asari whose introductory scene in Mass Effect 2 has her snapping the neck of a mercenary with combat stilettos. Impractical? Yes. Badass? Oh, hell yes.

Millenia of Grandia II‘s special attack ‘Heel Crush’ involves lifting herself onto a pillar of light in order to better stomp her opponent into the Earth with her snazzy purple boots. C’mon, we’ve all wanted to do that at some point.

From where I stand, the problem is not heels or impractical armor: it’s the excess. I’m not asking for real-world logic to always permeate the fantastic realm of video games (to reiterate, I love Bayonetta), but the keyword here is ‘fantastic.’ We can design women in more ways than high heel-wearing, airbrushed fantasies rendered in 1080p with the rare exception of a fat, ‘average,’ or old woman delegated to the backdrop. A broad imagination should not hit a roadblock when a straight male boner’s fine dining is at stake.

To developers and concept artists: if they’re going to be there (and sometimes they don’t need to be), get creative! Give us designs we can memorize with more than just negative thoughts. Let it inform the character rather than contradict them for the sake of giving the lowest common denominator another feminized aspect to whack off to. Hell, put some on male characters. Heels were originally worn by horse riders and European upper class, after all, for reasons ranging from being better able to grip stirrups or flaunt wealth. When history is more inventive, you need to (no pun intended) step it up!

So, how do you feel about high heels? Overused fanservice, an acceptable fantasy, or a tired design trend?

6 thoughts on “Impractical or Empowering? The Top 8 High Heels in Gaming”